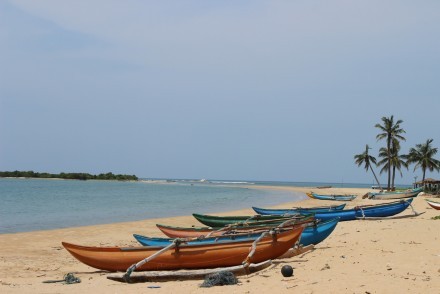 With Easter nearly upon us, school summer holidays are traditionally the next holiday season. However, as discussed in previous blogs, don’t miss out on the opportunity of visiting Sri Lanka in the off season (May and June) if you are able, when the island is much quieter, accommodation is the cheapest of the year, and many areas are ripe for exploration. Going back to the school summer holidays (July and August), the better areas to visit during this period are in the eastern and northern regions of the island, which are away from the southwest monsoon (May to October).

In July/August, the best beaches are on the east coast as they are well away from the southwest monsoon. The sky is clear and the ocean calm.

With the popularity of Sri Lanka knowing no bounds, the national parks and other wildlife watching areas are becoming overrun with visitors, which is having a significant and detrimental impact on the animals’ welfare. Reports of queues of jeeps lining up to spy a solitary, beleaguered leopard atop a rock in Yala, or a family group of elephants surrounded by gangs of shouting and selfie stick-toting tourists in Minneriya , or a flotilla of boats chasing and harassing an unfortunate whale off Mirissa are becoming more frequent and we at Tikalanka are very concerned by these increasing incidents. It is about time that the relevant authorities in Sri Lanka regulated the burgeoning wildlife sector before it is too late… There is a current restriction on the number of jeeps permitted daily into Yala West NP but more needs to be done across the whole island to mitigate the negative impact of ‘over-tourism’.

Ever since we launched back in 2004, Tikalanka has promoted responsible and sustainable wildlife watching. For instance, we have never endorsed or visited Pinnewala Elephant ‘Orphanage’ following adverse reports from Travellers’ Animal Alert, the global animal welfare campaign of the Born Free Foundation that we support, and some of our own customers who visited independently. In addition, after recent negative feedback from our own customers and poor general visitors’ reviews, we have stopped promoting the Turtle Conservation Project at Rekawa, which is in line with ResponsibleTravel.com, one of our principal partners. We will continue to review and assess our involvement in all of the wildlife activities that we offer as a fundamental best practice principle.

On a positive note, there are plenty of areas and providers offering top quality and responsible wildlife viewing experiences, as you will read in our customer feedback reviews. We support and seek the assistance of a range of wildlife experts across the country (and in Maldives, too – see ‘Maldives wildlife cruises’ below), which we hope will enhance our customers’ enjoyment of their holidays. Even the busier and more popular sites such as Yala can offer an unexpected moment or two of wonderment, as my family experienced a couple of years ago when we were lucky enough to see a leopard in a jungle clearing, a large male elephant crossing in front of us, and a sloth bear ambling along the track towards us, all sightings with no one else around!

We are pleased to introduce a range of whale and dolphin watching holidays in Maldives. All trips are led by Dr Charles ‘Chas’ Anderson, a professional marine biologist who has lived and worked in Maldives since 1983. Chas is the foremost authority on the whales, dolphins and fish species of Maldives, and a pioneer of whale and dolphin watching in the region. With his wife, Susan, he runs a small specialist business providing world-class wildlife watching holidays in the Indian Ocean. The main emphasis is on whales and dolphins, but all forms of wildlife, including birds, fish and some quite extraordinary marine insects, are also of great interest.

The cruises are based on a basic but comfortable live-aboard safari boat and conducted at a leisurely pace, allowing time to snorkel and to visit a variety of islands. Time spent around the southern Thaa Atoll in search of cetaceans migrating nearby will offer you a wonderful variety of tropical dolphin and whale species. There is also the opportunity to visit uninhabited, fishing and resort islands, and plenty of time for snorkelling on the coral reefs. If conditions are suitable, you can expect to swim with giant Manta Rays, which are stunningly beautiful creatures, and for most people the chance to swim with them is a wildlife highlight of a lifetime. In Thaa Atoll there is a reasonable chance of a Whale Shark encounter as well. Please contact us for more details and prices of forthcoming trips.

On 05 February 2018, the government of Maldives declared a state of emergency, which was to be in effect for 15 days, but on 20 February 2018 extended it further. The initial decision followed civil unrest in the capital city of Malé due to a Supreme Court ruling on 01 February 2018 regarding the release of certain high-profile prisoners. The reported disturbances are confined to Malé, while the outlying islands, resorts and Malé International Airport are not affected.

The welfare and safety of our customers is paramount and we will continue to monitor the situation and provide information and updates as appropriate.  We assure customers that the situation does not affect resort operations. Customers arrive at the international airport in Malé, which is located on its own island, and travel from there directly to the resorts. At the resort there is, as always, permanent but discrete security, ensuring the safety of guests, as well as controlling access to the resort. The resorts continue to operate as usual and without interruption, however as a precaution, the resorts have decided to cancel Malé excursions until further notice.