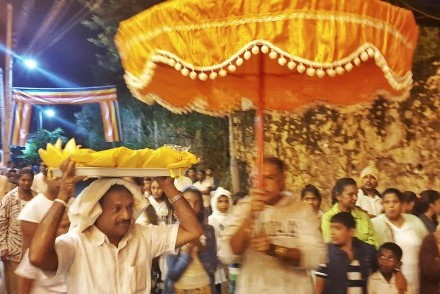 I have just returned from my annual research trip to Sri Lanka, although it may be biannually from now on considering the climate crisis… On arrival on the island, it was a privilege to be invited to the Katina Pinkama ceremonies at Pathi and Suba’s house and local temple, where they had the honour of offering the special robe for the event to Nanda sadhu, their head monk and great friend of mine.

Pathi and Suba’s preparations for the event started three months ago with weekly visits to the temple for Bodhi pujas (blessings) and danas (food offerings). The night before the “Day of Great Merit” we joined the whole village at the temple for a special puja, which included a sermon by Nanda sadhu. The following morning well before dawn (at about 03.30) a procession headed by two drummers and a pipe player followed by around 50 white-clad devotees from the local community bearing sesath (large round fans) and Buddhist flags descended Richmond Hill in Hanthana, which had been dressed with Buddhist banners and flags and lit by flaming torches, passed by the temple and headed towards Kandy. At the front of the procession, under a silken umbrella, devotees took turns to bear the saffron katina cheevaraya (robe) on their head. Community members lining the route reached out to touch the cheevaraya with chants of "sadhu, sadhu" (holy, holy) filling the air. We returned to the temple at dawn.

The procession is part of the katina cheevaraya offering, a highlight of the Katina Pinkama, a day of religious activities marking the end of the Vas retreat, when Buddhist monks across Sri Lanka emerge from a three-month period of prayer and meditation. Considered one of the eight great meritorious acts of Theravada Buddhism, it takes place on a designated date between the full moon days of October and November. The cheevaraya is prepared by sewing pieces of cloth together, following the robes of the early monks, which were made of scraps of discarded cloth from cemeteries.

The practice originated in India in around 6BC, the time of Gautama the Buddha, when monks were austere renunciates. Having turned their backs on ordinary life, they had to beg for alms, shelter and medicine. The four months of the Vassana or rainy season, from July to October, were fraught with storms, flooding and disease that often prevented them from getting basic necessities. So they stayed indoors in a monastery or forest retreat, for three of the four months, immersed in meditation and teaching, their needs met by laity.

A single incident gave rise to the robe offering. A group of forest monks travelling to meet the Buddha after performing their Vas retreat were caught in a storm and arrived muddied and soaked. Owning only a trivaca (a robe of three parts), they had no change of clothing, so the Buddha gave them permission to accept a new robe. That act generated the practice of laity preparing robes for monks who have completed both the Vas retreat and the Pavarana ceremony, the final ritual, where monks evaluate their own and each other's conduct to establish purity of their vinaya (code of discipline).

For both monks and devotees, Vas is time to accumulate great merit. It is mutually advantageous, with the benevolence of the laity allowing the monks to strengthen their vinaya, so benefitting humanity. It is also a time to learn dharma (teachings of the Buddha) from medicant monks remaining stationed in one place. Ordinary village folk rejoice at the opportunity to take care of their monks and accumulate great merit.

The Katina Pinkama included various activities. Before the robe was handed over to Nanda sadhu, there were Bodhi pujas, danas and sermons. A jak branch, symbolising the kapruka (tree of plenty), was erected in the temple precincts for devotees to place offerings such as medicines, slippers and dry rations. A group of 26 monks were invited to the temple for the event and were offered robes and various everyday items. Nanda sadhu delivered a sermon on the merits of the Katina Pinkama and the ceremony ended with the formal handing over of the katina cheevaraya. This entailed Nanda sadhu and a coterie of the most revered monks from the group stepping into the adjacent stream, wetting the robe to represent its washing, and finally sewing part of the robe together to symbolise the original tradition of making robes from discarded scraps of cloth.