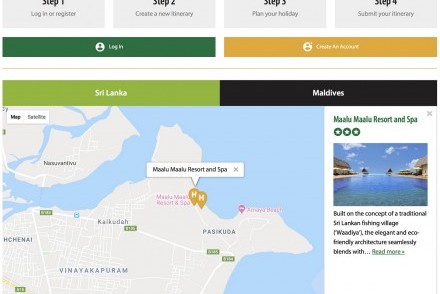 Tikalanka has developed a new version of its sophisticated and user-friendly online tailor-made Trip Planner, which offers you the opportunity to create your own holiday in Sri Lanka and Maldives, wherever you are! It enables you to choose the place, route, sites of interest, activities, length of stay, and type and style of accommodation that suits you best. Please go to Trip Planner to create your own dream holiday now!

We have launched a beta release of the Trip Planner initially as we continue to develop the new version. This means that not all of our recommended accommodation will be available on Trip Planner at the present time and some of the entries will be incomplete. We hope to have the finished Trip Planner available by the beginning of October. Please feel free to take a look at the current Trip Planner and tell us what you think!

Once upon a time, this term was used to describe the Europeans – mainly the Dutch or the Portuguese – employed in the service of the Dutch East India Company (Vereenigde Oost-Indische Compagnie – VOC) or free to set up in business on their own. With the onset of British colonisation, in which they played an important auxiliary role, this distinction disappeared. The word "Burgher" began to be used to describe anyone with European ancestors. During the same period, they abandoned the Dutch language in favour of English and monopolised the top posts in the colonial administration. With the gaining of independence, when Sinhalese replaced English as the official language, many of them chose to emigrate, with Australia as a favourite destination. Today these heirs to the colonial past number about 50,000, and openly describe themselves as a community threatened with extinction.

Christianity was introduced by the Portuguese, although the discovery, at Anuradhapura, of a bas-relief of a hand holding a cross may point to the presence of a community of Syrian Christians as early as the 5th or 6th Centuries, following the example of the west coast of India.

Unlike India, where Christian missionary work from the late 18th Century was often carried out in spite of colonial government rather than with its active support, in Sri Lanka missionary activity enjoyed various forms of state backing. One Sinhalese king, Dharmapala, was converted, endowing the church, and even some high caste families became Christian. When the Dutch evicted the Portuguese they tried to suppress Roman Catholicism, and the Dutch Reformed Church found some converts. Other Protestant denominations followed the arrival of the British, though not always with official support or encouragement. Many of the churches remained dependent on outside support.

Between the two World Wars, Christian influence in the government was radically reduced. Denominational schools lost their protection and special status, and since the 1960s have had to come to terms with a completely different role in Sri Lanka. Despite the limited influence of Christianity in the central government of modern Sri Lanka, Christianity is still practised by 8% of the population and Roman Catholics account for 90% of the island's Christians. Today Christians feature in every social category of the island, from the poorest (the fishermen on the west coast) to the most influential (the middle classes in Colombo), and Christmas is a public holiday in the national calendar.

Where to stay in… Mirissa

Number One Mirissa is set in a stunning location in terraced grounds overlooking gorgeous Mirissa beach and with panoramic views of the bays beyond. It is a sympathetically designed hotel, in part homage to Bawa and colonial traditionalism, offering surf-chic luxury and direct beach access.

Imagine Villa Hotel is an intimate and modern beachfront hotel inspired by the colonial architecture of the island and offering ten spacious suites and rooms with balconies or terraces. Imagine encourages you to “relax, feel happy and free” – a home away from home close to beautiful Mirissa bay.

Paradise Beach Club is a long established and enduringly popular beachfront hotel on one of the island’s most attractive crescent-shaped sandy bays. Nestled in a beachside palm grove and offering a variety of room styles, this budget resort offers modest accommodation for the thrifty sun seeker.