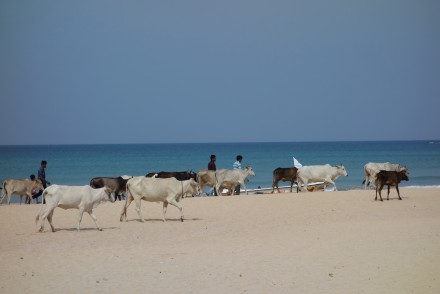 Northern Explorer – Discover the north and east of Sri Lanka

Travel north to experience a very different Sri Lanka with its vast lagoons full of migrant waders, donkeys and baobabs, Tamil script and Hindi songstresses, bicycles and Brahman cows. Since the declaration of peace on the island in 2009, the north and east of the country have opened up and developed, but not too much – yet. So now is the time to visit on your very own tailor-made holiday. Our Northern Explorer itinerary takes in Mannar Island, Jaffna, the east coast around Trincomalee and the Cultural Triangle.

The flatlands of the north-western coastal plain are similar to the dry zone region of the southeast of the country around Yala and Tissa until you reach the causeway. Here everything changes with the typical dry zone scrub jungle giving way to a vast lagoon, mud flats, wading birds and… donkeys! These beasts of burden were originally introduced to Mannar Island by Arab traders who used them as pack animals for transporting their goods and wares. Over time, some donkeys escaped and subsequently a feral population flourished. Now these rather sad-looking but endearing animals may be found grazing the sparse grasses and thorn bushes at the side of the road.

Mannar Island is home to thousands of migrant birds from October to March. Thantirimale, an ancient village and temple complex and there are other sites of interest such as Mannar and Arippu Forts, Doric House, Talaimannar port and lighthouse, and Thiruketheeswaram temple.

Venturing further north to Jaffna you immediately appreciate that you have arrived in a different land with Tamil script adorning highly-decorated advertising hoardings and shop fronts while the unmistakable high-pitched ululations of Hindi songstresses resound in streets filled with scooters and bicycles dodging the sacred Brahman cows meandering unpredictably to forage amongst the abundant litter. Jaffna has recovered well from the ravages of war and, while it isn’t a city of many ‘must see’ sites, the real appeal of the area is the ethereal nature of the environs and the innocence of the people.

Nallur Kandaswamy Kovil is one of the island’s most holy Hindu temples and the focus of a spectacular annual festival climaxing with parades of juggernaut floats and gruesome displays of self-mutilation by entranced devotees. The temple is the most impressive religious building in the city and it has cacophonic puja ceremonies (blessings) daily. The ascetic influence of this Murugan shrine emanates further afield as vegetarianism and temperance abound amongst the city’s population, in keeping with Hindu tradition. Also within the city are the reconstructed library, a World Heritage Site, and the renovated fort. Further afield and accessed by ferries are the islands of Nainativu, site of important Hindu and Buddhist temples, and windswept Delft, home to wild horses of Dutch origin.

Bearing east, you arrive at Trincomalee (or Trinco), which is blessed with one of the largest, natural deep-water harbours in the world and the envy of past conquerors from the Danes, Portuguese, Dutch, British and French to, more recently, the Japanese. Earlier, Gokana, as it was originally known, served as a major conduit for the island’s seaborne trade during the Anuradhapura and Polonnaruwa periods. Just north along the coast is Nilaveli, a relatively quiet beach area.

Fort Frederick is a 17th century Portuguese-built bastion and a stalwart of the city’s defences, and the old fortifications can still be seen today. Magnificent views and legends of ‘Lover’s Leap’ surround Swami Rock, a sheer drop of 100 metres to the crashing waves below, and the imposing Koneswaram Kovil, one of the five most holy Shaivite temples on the island, atop the rock still attracts devotees to its vibrant pujas. China Bay, the extensive inlet to the south of Trincomalee, has been a naval base since time immemorial and, since the declaration of peace, it has been open to visitors. There is an impressive range of war equipment outdoors plus small indoor museum areas.

The island’s Cultural Triangle, or ancient cities area, is home to no less than six of the country’s eight World Heritage Sites, with the oldest dating back to the 3rd century BC. Although these sites are principally of an historic interest, they are by no means cold, stony monuments since all of the temples, dagobas and stupas are still places of worship and veneration for locals, which makes them profoundly atmospheric and full of life, especially during the frequent religious festivals.

History and antiquity may be the bywords of the Cultural Triangle, but there is much more of interest including Minneriya and Kaudulla National Parks, which form an ‘elephant corridor’ for the vast herds roaming the eastern region of the country, and Wilpattu National Park, the island’s largest wildlife reserve as well as one of the oldest and most important protected areas in Sri Lanka. Principally a dry lowland zone, the main topographical feature in the park is the concentration of ‘villus’, basin-like fault depressions in the earth that fill with rain water during the monsoon season, which attract a variety of animals including leopards, elephants, sloth bears, crocodiles, water buffaloes, deer and a wide variety of birdlife.

One of the legends in the ancient chronicle known as the Mahavamsa describes the people of the island before the era of the great maritime trade. Since then, history has made this country into a pot pourri of cultures and ethnic groups, and mixed marriages have erased the differences to such an extent that, nowadays, it is impossible to distinguish a Tamil from a Sinhalese on the basis of physical appearance alone.

The population of Sri Lanka is currently around 21 million. Today the Sinhalese make up 75% of the total population.

Sri Lanka's Tamils (15%) comprise the long settled Tamils of the north and east (11%) and the migrant workers of the tea plantations in the Hill Country (4%), who settled in Sri Lanka from the late 19th Century onwards from India. Even though the two communities have common ancestry, they hardly ever intermingle.

The so-called "Moors" (a term inherited from the Portuguese), Tamil-speaking Muslims of Indian-Arab descent, were traders on the east coast and now constitute 9.5% of the population.

A much smaller but highly distinct community is that of the Burghers, numbering about 40,000 (0.2%). The Dutch (mainly members of the Dutch Reformed Church) and the Portuguese intermarried with local people, and their descendants were urban and ultimately English speaking.

The aboriginal inhabitants, the Veddha, have long since been absorbed into the general melting pot of cultures. Today may be only 200 or 300 still live in their ancestral homelands of Uva Province and maintain a Stone Age lifestyle.

Where to stay in… Jaffna

Jetwing Jaffna is located in the heart of the town and affords panoramic views of Jaffna and its surroundings. The hotel offers luxuriously comfortable accommodation influenced by the fascinating mix of colonial charm and Tamil culture of the locality. Elegantly furnished in a culturally contemporary style, the rooms are large and airy, with magnificent views of the town.

The Thinnai resembles the distinctive ‘thinnai’ homes of the region, the traditional and hospitable terraced town houses designed as havens of peace and tranquillity. In the countryside, Thinnai Organic farm preserves and protects the natural environment while encouraging and supporting the local community.

North Gate by Jetwing is just footsteps away from Jaffna railway station and equipped with an array of amenities and services including luxury balcony bedrooms, swimming pool and gym. Modern elegance meets northern heritage and its legendary hospitality at the new addition to the Jetwing family in Jaffna.